Inside The Cottage From The Holiday

If you follow us on any of our social channels you will have seen the beginning of our winter content trickling through our feed. Our Christmas shoot is hands-down the highlight of our working year, not only do we get to style and swoon over our carefully curated collection of decorations and cosy, winter-inspired products but we get to do so whilst drinking Baileys Coffee and watching The Holiday; and we get to call it ‘work’.

The Holiday is hands down our favourite Christmas film, we watch it as a family every year, far more times annually than we care to admit. This year, whilst setting up our shoot we took a deeper notice of Iris Simpkins’ (Kate Winslet) stunning cottage in the beloved film Nancy Meyers film and we ended up in a very interesting Google-hole. If you too are a lover of the undoubtedly charming Rosehill Cottage and its interiors, or just the Christmas rom-com in general then keep on reading.

Before we get started, we have some vital information for you, our hearts sank when we heard it but it is imperative that you know the truth. The iconic Rosehill Cottage from The Holiday doesn’t really exist.

Production designer, Jon Hutman, explained “We were looking for the cutest, smallest, most English cottage that we could find, and we found one, actually, that belonged to the National Trust.” Unfortunately, the cottage they found was incredibly isolated and over four hours from London where the entire cast and crew was based for filming which didn’t work for the budget. And thus, the Rosehill Cottage we know and love from the film was created from scratch. It’s undoubtedly one of the most adorable cottages we’ve ever seen on film, and it’s the quintessential style closest to our hearts. Despite the rooms of Rosehill Cottage only ever existing on a Hollywood sound stage, that doesn’t make them any less covetable.

The Exterior of Rosehill Cottage 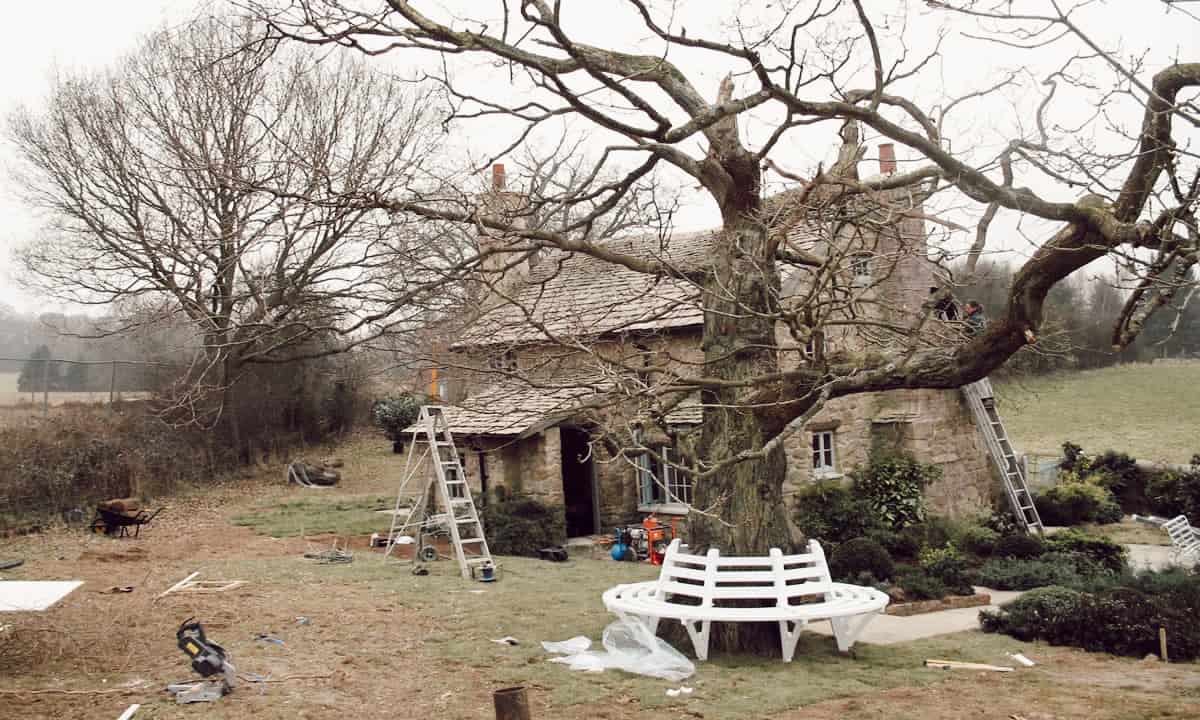 The wonderful exterior of Iris’ Rosehill Cottage was set in a town supposedly a 40 minute commute from London. The level of detail in the construction of the film set was breathtaking, created in just a matter of weeks. A prop company was instructed to help create the wintery grounds of the cottage, they said:

“As the storyline was set at Christmas we could not attempt to turn the garden at ‘Rosehill Cottage’ into a glorious riot of colour. Instead, through the introduction of some green and sculptural planting in flower beds, rambling vines over stone walls and a collection of terracotta planters and chimney pots with aged lavender and heather, the garden’s subtle charm and character was gently suggested. Adding to the overall feel of winter’s slumber was the 20ft bare winter tree that we installed in the garden with a wooden tree-seat.”.

“The cottage … it was quite amazing to watch it being built. It started off as a field and four wooden pegs, and a cross bar held up by two tall men. Within four days, you could actually see the cottage.“

“And then four weeks spent landscaping and gardening the outside to make it look like the garden has been there for, you know, 200 years. As long as the cottage has been there. So the house itself just appeared in one week.” ―Greenacre, from The Holiday DVD

The Interior of Rosehill Cottage

The original plan was to decorate the cottage with more contemporary furnishings to play out the back story of Iris moving to the country after living in a small Flat in London. In the end the modern furniture didn’t fit the set, making it look young and cheap. Production designer, Jon Hutman said, “A lot of it is trial and error. It comes down to how do you make it feel English without making it look like a grandmother’s house?” Nancy Meyers was in agreement: “We pushed furniture around in there forever. We kept trying different things. But I think we arrived at the right thing.”

A still from the film: Cameron Diaz as Amanda Woods on her first night at Rosehill Cottage.

Rosehill Cottages kitchen was the stuff dreams are made of, for us anyway. Small, practical and simply adorable. With a large roaring fire, open shelving and that all important table lamp on the counter top.. It’s as if they knew we were coming. (We have a whole piece on the importance of table lamps in the kitchen, which you can read here.)

Those painted harlequin floors paired with the worlds smallest tub are some of our favourite features from Rosehill cottage. There is something bedroom-eque about the set here. We love the layered lighting, repurposed dresser, open stonework, you know- just about everything. You can actually buy the very tub used in the film, not the exact one, but this is where the production team sourced it from. Shop here.

2 thoughts on “Inside The Cottage From The Holiday”